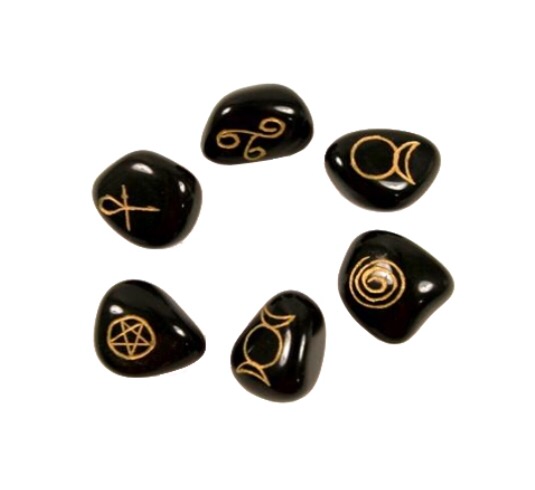 Meaning of the six symbols: The five-pointed star within a circle is the most common Pagan symbol, and it is typically used to identify oneself as a Pagan or Wiccan. The five points represent the 4 elements plus the spirit, and the circle connects them all. A five-pointed star without the circle is sometimes called a pentagram, rather than a pentacle. Based on numerology, the five points means the pentacle symbolizes the Earth element and can be used as an Earth symbol on an altar.The triple moon is a Goddess symbol that represents the Maiden, Mother, and Crone as the waxing, full, and waning moon. It is also associated with feminine energy, mystery and psychic abilities. You often see this symbol on crowns or other head-pieces, particularly worn by High Priestesses.The short and traditional meaning for the Ankh symbol is "everlasting life". This symbol is a hieroglyph seen in countless ancient Egyptian carvings, usually held in hand by Gods and pharaohs to show how they preside over life (in other words, are immortal). In these images, the ankh is held by the loop rather than the base. The ankh is a popular symbol among Pagans, likely due to the similarity to a Christian cross which makes the ankh much less shocking to others, as compared to a pentacle.There are many variations on the basic Triskele (or triple spiral) symbol. The one illustrated here is very simple to illustrate the basic look of the symbol. The triskele is a Celtic symbol, and symbolizes the power of life and rebirth. It combines the spiral (often used to illustrate the cycle of life) and the number 3 is a sacred number, as seen in the phases of the triple Goddess. This symbol is also referred to as a triskelion. The Horned God symbol (sun and moon) is one often used in Wicca to represent the masculine energy of the God. It is a symbol of archetype, as often seen in Cernussos Herne, and other gods of vegetation and fertility. In a few feminist Wiccan traditions, such as branches of Dianic Wicca, this symbol is actually representative of July's "Horn Moon" (also known as a Blessing Moon), and is connected to lunar goddesses. In terms of spirituality, the Spiral symbol can represent the path leading from outer consciousness (materialism, external awareness, ego, outward perception) to the inner soul (enlightenment, unseen essence, nirvana, cosmic awareness). Movements between the inner (intuitive, intangible) world and the outer (matter, manifested) world are mapped by the spiraling of archetypal rings; marking the evolution of humankind on both an individual and collective scale. Moreover, in terms of rebirth or growth, the spiral symbol can represent the consciousness of nature beginning from the core or center and thus expanding outwardly. This is the way of all things, as recognized by most mystics. Gaining more expansive awareness of the spiral meaning, we can contemplate its appearance in the natural world.